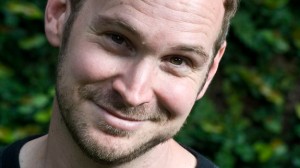 Born in Brisbane in 1972, Damian Barbeler now lives in Sydney. He graduated with 1st class honors and a Master of Music qualification from the Queensland Conservatorium of Music where he studied with Gerard Brophy. Damian Barbeler was the recipient of an Australian Postgraduate Research Award and completed research into creativity and learning in music. He has conducted a number of Artist in Residence programs in Queensland, Victoria and New South Wales and is in demand for his workshop skills.

Damian Barbeler has composed works across a range of genres, including music for theatre, live and filmed dance, and concert works for voice, instrumental solos and ensembles of varying sizes.

In 1999 his 'community cantata', Gather Round for orchestra, choir and vocal soloists was commissioned by the Sydney Conservatorium High School and conducted by Richard Gill at its premiere in December of that year.

In 2000 Damian Barbeler was Composer in Residence at MLC School in Burwood, Sydney, where he continues as composition tutor. In July 2000, his aria Now All is as You Wished was performed by Australian soprano Deborah Cheetham and the Queensland Youth Symphony as part of Australia's day of celebrations at World Expo in Hanover.

Among other works in 2000 Barbeler completed Spine, a new work for Australia's premier saxophone quartet, Continuum Sax, and a score for the dance film Mourning Hours; as well as a short work for solo cello, Freeze Dry. A particular highlight was the composition of Filter, a work for orchestra which was recorded by the Sydney Symphony Orchestra in November 2000 a

As well as his involvement as President of the Contemporary Performers and Composers Fellowship, Damian Barbeler is a founding member of the Brisbane composer partnership, Compost. His concerto for amplified violin, Skullcracker, was premiered during Compost's 'Big' concert in 1999.

In 2001-2002 Barbeler will be a participant in the Australian Composers Orchestral Forum (ACOF), a program run by Symphony Australia and the Australian Music Centre which will see a new a work by Barbeler premiered by the Western Australia Symphony Orchestra.

More recently he has become vocalist for the "Meridian" trio, with Toby Wren (guitar) and Freeman McGrath (piano). A number of his works can be heard on CD, including To Rise on The Australian Voices "Sea Children" CD, and his guitar works on the "Compost: Guitar Works" CD.