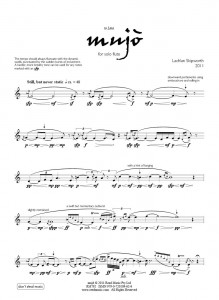 This piece evokes the sound world of the shakuhachi, a Japanese end-blown bamboo flute. Despite the simplicity of its construction, the shakuhachi can produce a stunning array of tone colours, pitch slides and special effects. This piece incorporates some of these uncommon sounds, while exploiting the technical agility of the western flute. Besides the portamento slide and quarter tone key trills notated on the score, the performer is encouraged to add a short burst of breathy tone quality on notes marked sfp, This can be achieved by using a harder articulation or a less focussed embouchure. The equivalent technique on the shakuhachi is called mura-iki, which means “breath sea sound”.

The piece also features the floating sense of time found in the traditional shakuhachi honkyoku solo pieces. These pieces do not have a beat as such, and the music moves always with the rhythm of the performer’s breath. Great importance is placed on the silences between phrases, each inhalation being as important to the overall shape of the music as the notes themselves. The lack of barlines in the piece reflects this, with dotted barlines appearing only where they indicate a distinct change in mood or place of structural importance. While the rhythms have been notated quite precisely in the score, it is expected that the performer will push and pull the underlying tempo in a manner that gives a sense of a constant ebb and flow to the music. To a certain degree, this can follow the dynamic shape of the phrase, ie moving forward with crescendos and slowing down in the decrescendos, while some additional written indications have been included on the score.

The title mujō refers to the Japanese aesthetic concept of transience, or impermanence. The acknowledgement that all things are in a constant state of flux, including our lives, is a common theme in many forms of Japanese art. In the honkyoku pieces it brings an acceptance that each piece can differ from day to day according to any number of factors, such as the player’s condition or the acoustic of the performance venue. It is hoped that this piece will continue to evolve as a player learns and performs it, therefore embodying the principle of mujō  in itself.