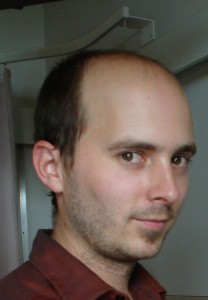 Born in 1980 Taran Carter has been writing music since he realised that to be a Pop Star you either had to look good, sound good or write nice tunes. He chose the latter. Taran's musical interests are diverse; they include Toru Takemitsu, Paul Simon, Iannis Xenakis, Augie March, Arvo Pärt, the Beatles and Claude Debussy. Perhaps because of these varied influences Taran’s music often explores the common aspects between the pop and contemporary classical worlds. This approach has attracted performances by groups such as the Melbourne Symphony Orchestra, Opera Australia, the Song Company, The Melbourne Saxophone Quartet, Anne Norman, Speak Percussion and Ensemble Bash. Taran has also written music for film, television, theatre and in 1999 was asked to write two songs to which the Australian Synchronised Swimming Team swam at the 2000 Sydney Olympic Games. In 2006 he followed up this athletic theme by writing music designed to use as a “running tool”. This features on the Run 2 Rhythm website, run2r.com.He has won many awards including the A.S.M.E. Victorian Young Composer’s Competition in 1998, the Art of Percussion Composition Competition in 2000, the Quip Quip Composition Competition in 2001, the Percy Grainger Composition Competition in 2002 and the Magpie Research Dance Collaboration Award in 2004.Other highlights in Taran's career include the sold-out premiere season of his first opera, Busking Hugs – for five singers and four saxophones, (commissioned by Opera Australia) in October 2001 and the Melbourne Symphony Orchestra commission and premiere of Moondani Music in March 2004.At the Victorian College of the Arts in Melbourne Taran studied under the tuition of Mark Pollard, Julian Yu and Johanna Selleck but also found time to grab lessons from other influential composition teachers such as Michael Smetanin, Stuart Greenbaum and Laurie Whiffen. He completed his Bachelor of music in 2001, returning in 2004 to complete his Honours year. It was at the VCA that Taran formed the acclaimed contemporary classical/pop group Tehai who premiere many of his works.Taran lives not far from Melbourne with his partner, daughter & cocker-spaniel.