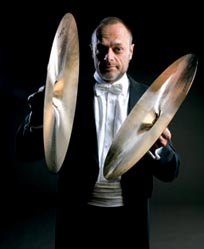 Originally from Tasmania, Robert Cossom studied percussion and drum kit with Tom O'Kelly and Eric Johnstone. He attended the Tasmanian Conservatorium, where he was awarded distinctions in composition and performance. Robert has performed with the Queensland, West Australian & Tasmanian Symphony Orchestras and is currently a member of the Melbourne Symphony (MSO). He has appeared as soloist with the Tasmanian and Melbourne Symphony Orchestras and has given solo recitals in Melbourne, Sydney, Hobart and Canberra. He maintains a considerable commitment to education; he has tutored at several National Music Camps, presented schools' concerts for the MSO and is currently Co-ordinator of Percussion at Melbourne University.

In 2004 he established the MSO Snare Drum Award for tertiary students. During 2007 and 2008 he was composer-in-residence at Border Music Camp, Albury. Robert's compositions are regularly heard in Australia and overseas, including recent performances at the Banff Centre in Canada. His works appear in AMEB, VCE and national tertiary education syllabi. He is a member of the board of the Cybec Foundation. A proud alumnus of the Derwent Scottish Pipe Band, Robert has addressed the Japan Percussion Society on the art of cimbalom playing.