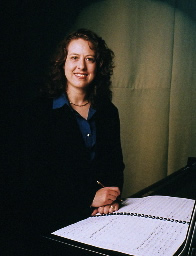 Maria Grenfell (b. 1969) was born in Malaysia, and completed composition studies in Christchurch, New Zealand, the Eastman School of Music in Rochester, New York, and the University of Southern California in Los Angeles, where she was also a lecturer. Maria Grenfell’s work takes much of its influence from poetic, literary and visual sources and from non-Western music and literature. Her works are performed by musicians such as the Australia Ensemble, The Seymour Group, the Vienna Piano Trio, the New Zealand Trio, the Esperance Trio, Stellar Collective, and Antipoduo in the Netherlands. Orchestras that have commissioned, performed or recorded her music include the Adelaide, Queensland, Sydney, Tasmanian, West Australian Symphony Orchestras, and the New Zealand Symphony Orchestra, Auckland Philharmonia, Auckland Chamber Orchestra, Wellington Sinfonia and the Christchurch Symphony. Maria Grenfell’s music is broadcast regularly on ABC Classic FM in Australia and Concert FM in New Zealand, and is released on Kiwi-Pacific and Trust CDs. Her works are available from the Australian Music Centre, SOUNZ New Zealand Music Centre and Reed Music.

Maria has also been a violinist with the Christchurch Symphony and the New Zealand Youth Orchestra, and performed bowed piano with the University of Southern California Percussion Ensemble. She lives in Hobart with her husband, guitarist David Malone, and their young son Alexander, and is a lecturer at the University of Tasmania Conservatorium of Music.