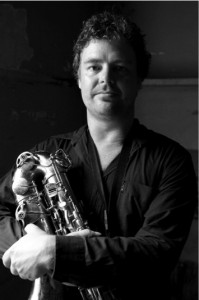 Martin Kay is accomplished saxophonist, clarinetist and composer. He is a featured soloist on Tim Davies 2009 grammy-nominated recording Counting To Infinity and plays tenor saxophone in Australia's leading saxophone quartet Continuum Sax. He has performed with the Sydney and Tasmanian symphony orchestras, the Malaysian Philharmonic orchestra and Opera Australia. He has recorded on Counting To Infinity (Tim Davies), Music To Dance To (The Fantastic Terrific Munkle), and The Reaston/Kay Effect (The Reaston/Kay Effect). Martin has studied in New York City on a Churchill Fellowship and has a Master of Music degree in saxophone performance from the Sydney Conservatorium of Music. He lectures in saxophone at the University of Newcastle.