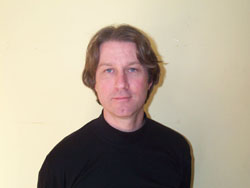 Peter Neville is a graduate of the Victorian College of the Arts and was appointed Head Of Percussion there in 2000. Whilst he works across the range of musical styles he has a particular commitment to new music. As the percussionist of the ELISION Ensemble for twenty-three years, Peter has been involved with practically all their concerts, compact discs,  and international tours. Works including Chris Dench's Driftglass, for percussion and ensemble and Richard Barrett's abglanzbeladen- auseinandergeschreiben, have been written for and premiered by him. Peter is also a member of  groups including Jouissance, the David Chesworth Ensemble, The Raga Dolls Salon Orchestra and SPEAK Percussion and he has recorded and toured internationally with each of them.

His orchestral work has included tours to Europe with the Australian Youth Orchestra and Japan with the Melbourne Symphony. With that orchestra he was also part of the Australian premiere of Messiaen's Turangalila Symphony, in the presence of the composer, and he took part in their Australian tour with Elton John. He has performed in numerous musicals, including West Side Story, Cats and Company and in three Australian tours of the Broadway version of The Pirates of Penzance. He toured Australia as musical director of Tap Dogs. Other theatrical tours have included the Australia/China tour of Playbox Theatre’s Cho-Cho-San, and Richard the Third with the Royal Shakespeare Company.

Within dance orchestras he has supported performances of the Bolshoi Ballet, the Russian State Ballet, the Nureyev Farewell Tour and the Netherlands Dance Theatre. With HumanVeins Dance Theatre he took part in the Australian premieres of Iannis Xenakis' Oresteia, and was guest drummer with the Balanescu Quartet in their three Australian  seasons of Possessed with the Meryl Tankard Australian Dance Theatre. Peter Neville appears on CD recordings ranging from pop albums by Peter Andre and Deborah Conway to the experimental industrial album “New Maps of Hell” by sound artist Paul Schutze.

In March 2006 Peter was Creative Director for the Commonwealth Games International Youth Masterclass In Percussion.

In addition to his performance activities Peter has composed music for a number of ensembles and for theatre companies including Playbox, Handspan Theatre and Arena Theatre. His radio work After Hildegard has enjoyed repeated airplay.