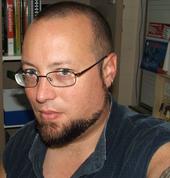 Since graduating with honours in composition from the Tasmanian Conservatorium of Music in 1997, Sibson has been working as a freelance composer and percussionist on a variety of projects in many genres. He has a keen interest in the integration of physical instruments with electronic sound creation and manipulation, especially within the recorded medium.

His original chamber music and electronic works have been both performed live within Tasmania and broadcast on national radio, and the CD recording of his small ensemble work The Watchmaker Suiteis scheduled for release soon. Currently Sibson has been working a great deal with Tasmanian professional theatre companies including Terrapin Theatre and IS Theatre Ltd. To date he has produced music and sound for 'The Dark at the Top of the Stairs' (2000), 'Insatiable' (2001), 'Stormy Night' (2002), 'The Tactile Twins'(2002), 'Instant Famous' (2003), 'Frankenstein' (2004-05), and 'The Storytellers Shadow' (2005).

Recent commissions also include the work Strange Views from Within Walls for the staff ensemble at the Tasmanian Conservatorium of Music, and Voices of History, a work for the Tasmania Chorale celebrating the bicentenary of the city of Hobart. Released recordings include works on the compilation CDs The Keating Tangos (for clarinet and piano), the Tasmanian Saxophone Quartet's Ride, and Temple Place Jazz Live.

When not composing, Sibson makes a living by performing as a kit drummer/percussionist with several ensembles, spanning genres from Salsa to Funk. He has also been the musical director and orchestra manger/conductor for several musical theatre productions. Other placements include lecturing in Composition, music technology, ethnic percussion and aural studies at the Tasmanian Conservatorium of Music and the position of Performing Arts Program officer with Arts Tasmania.