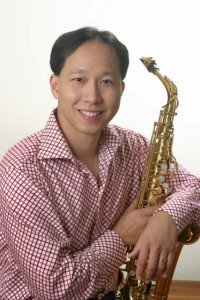 Widely recognized as one of the leading classical saxophonists in the world, Kenneth Tse [cheh] began his career as a winner of the New York Artists International Competition, making his Carnegie Hall debut in 1996 and being hailed “a young virtuoso” by the New York Times.  Since then he has been a frequent soloist in five continents and has made solo appearances with Des Moines Symphony, United States Navy Band, Slovenia Army Band, La Armónica Band of Spain, Thailand Philharmonic Orchestra and Hong Kong Sinfonietta among others, as well as at venues such as World Saxophone Congress and North American Saxophone Alliance conferences.  He has also been a guest clinician at prestigious conferences hosted by the California Band Directors’ Association, Iowa Bandmaster’s Association, and the Midwest International Band and Orchestra Clinics as well as universities worldwide.

Since publishing his first recording with Crystal Records at age 23, Tse has subsequently released ten critically acclaimed solo and chamber CDs under Crystal Records, RIAX Records, Enharmonic Records and Arizona University Recordings.  The Fanfare magazine praised, "Hong Kong-born Kenneth Tse is of the caliber of instrumentalists whose very sound is captivating." American Record Guide echoed with, “supremely elegant tone…sheer virtuosity.”  Saxophone Journal wrote, "Kenneth Tse is a phenomenal saxophonist with incredible technical and interpretive skills. His tone is absolutely lovely. His fingers are precise and rapid. His interpretive skills are excellent having the ability to create vast aural fantasies in the listeners’ musical soul. The true magic of music is to take a series of ink blots on a piece of paper and turn them into temporal living entities that almost lives and breathes. And…Kenneth Tse is the 'master magician’.

As an advocate for new music, Tse has had over twenty works dedicated to him by notable American composers such as David DeBoor Canfield, John Cheetham, David Froom, Perry Goldstein, and Walter Hartley, Barry Cockcroft of Australia and Piet Swerts of Belgium.  Tse has recorded and premiered many of these concertos, sonatas, solo works and chamber pieces. He has also arranged music for the saxophone (published by Reed Music, Australia), and his articles have been featured in the Saxophone Journal, Saxophone Symposium, Iowa Bandmaster Association Journal and Yamaha Education Series

Kenneth Tse has received numerous awards and grants including the prestigious Hong Kong Jockey Club scholarship, New York Music Performance Trust Fund, Indiana University Marcel Mule Scholarship, University of Iowa CD Subvention Fund, Arts and Humanities Initiative Grant, Barlow Commission Fund, as well as an honorary life membership from the Contemporary Record Society. As a winner of the Artists International Competition, Tse gave his acclaimed debut recital at the Carnegie Hall.  He made another appearance at Carnegie after receiving the Alex Award from the National Alliance for Excellence.

In 2009, desiring to give back to his home city, Hong Kong, Tse created the first Hong Kong International Saxophone Symposium which attracted over 70 saxophonists from around the world to join the event.  In addition to Tse, Eugene Rousseau from U. of Minnesota and Claude Delange from Paris Conservatory were the faculty members to 12 active participants from three continents.  With the tremendous success of the premiere event, Tse has formed the Hong Kong International Saxophone Society as part of an effort to facilitate more interest in saxophone performance as well as to continue hosting the symposium every two years to expose Asian saxophonists to world-class saxophone performers and teachers.

Although still early in his teaching career, Tse's students have already garnered high recognition through competitions and recordings as well as concert appearances.  During the 2010 North American Saxophone Alliance National Competitions, Tse's students from University of Iowa won three of the top four awards in the conference's classical competitions (in both solo and chamber music categories), the first time for a single studio to do so in the history of the conference.  In the same month, his students also won the top chamber music prize and the second solo prize at the Music Teachers' National Association Competitions.