The Treacherous Tango was composed for principal flautist of the Sydney Symphony Orchestra, Janet Webb. In July 2002 I was invited to perform the Artie Shaw Concerto for Clarinet at the Sydney Opera House for the Sydney Symphony Orchestra’s “Swing in to spring” series. Whilst waiting in the wings backstage, Janet asked me if we could meet up for a talk sometime about jazz and Latin styles. A few weeks later after hearing Janet play, I began sketching “Treacherous Tango” for her wonderful CD “Tango and all that Jazz”.

The Treacherous Tango is in essence a cross-over piece in that it is never fully Latin, jazz or classical for any significant amount of time. The first section is a kind of “Bach goes Latin”. This then heats up a bit and changes in to an improvised solo section. The piano gradually drops out and leaves the soloist merrily grooving away over the feel. Realising that they are now completely venerable and on their own, the soloist becomes a little embarrassed and sheepishly fades out all the while tring to coax the piano back into the “game”. Finally the soloist gives up trying and instead, decides to launch in to a rollercoaster passage that the piano, (not wanting to be out done) effortlessly mimics but in octaves. Both then launch into a fiery Latin pattern that re-energizes the Latin feel once more.

The romantic section that follows, brings a little of “Spain” to the feel before both instruments frolic through a dual-time feel section that is a walking bass four feel in the left-hand of the piano against a turblent three feel in the solo part and right-hand of the piano. This culminates in both instruments swinging over a very short slow swing four-feel passage. The soloist then decides to try a bit of “improvisation” and takes-off over this feel once again. Shortly following this, the piano flies into a fiendishly difficult Latin styled solo with the soloist following closely behind.

After the soloist blazes its way through another “improvised” solo, the first and second themes return with vengeance and lead to a musical frenzy of furiously flying accelerando passages that end with a fluter tongued trill. Then with one final short argument and a rapid triplet outburst, it’s all over. Phew!

It’s quite a blow for anybody so when you do get to the end take time to praise yourself and your partner in crime at the piano for a great effort! 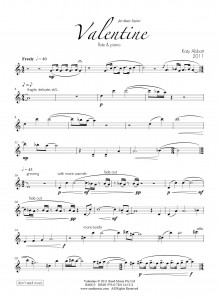 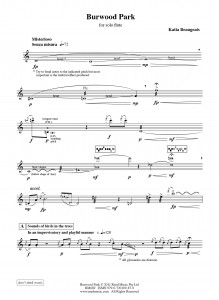 Burwood Park for solo flute was composed in 2008 for Brisbane-based flautist, Janet McKay, for a concert at the Queensland Art Gallery in South Bank.

This piece is named after a park situated in a Western Sydney suburb. Programmatically, Burwood Park consists of five sections depicting the sounds of nature and people we come across as we walk through the park: birds and the wind in the trees, children singing and playing, chess players getting stressed and agitated, screaming and shouting at each other and Tai Chi dancing.

Burwood Park begins in a slow, mysterious and improvisatory style. A quirky, rhythmic, birdcall motif emerges, gradually transforming into a scene of angry chess players. This is a very loud, fast, exciting and virtuosic passage which showcases the technical ability of the flautist. The final section is based on a pentatonic scale to imitate the Asian music typical of Tai Chi. A tranquil and meditative atmosphere should be conveyed to represent the Tai Chi dancers in the park; their slow dance movements moving along to the peaceful music. Whistle tone and singing techniques produce a range of soft harmonic effects to end the work.

The duration of Burwood Park is 6 minutes. 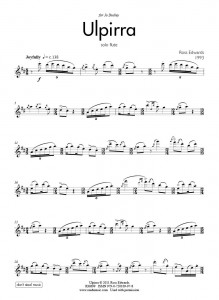 Ulpirra is an Aboriginal word meaning pipe or flute. It has been performed and recorded on many different treble instruments apart from the recorder: piccolo, flute, oboe, B-flat and E-flat clarinets, a special version for bass clarinet with handclapping accompaniment in Enyato IV, and soprano or alto saxophone.

Being short and snappy it is especially useful as an encore piece for recitals.