Tycho, Tycho, Tycho is dedicated to my dear friend and mentor Maestro Tommy Tycho. Tommy has spent 60 years working in Australia as a composer, arranger, pianist and conductor. Not only is he one of the finest arrangers and orchestrators on the scene today but he is also a mentor and role model for hundreds of Australian musicians and students.

Tycho, Tycho, Tycho was inspired by the tune Tico, Tico and apart from the fact that it makes a fun little play on Tommy’s name, it is also very much how I perceive the great Maestro’s spirit to be.

The first theme carries within it the feel of the original Tico, Tico but the melody is of course completely different and much more difficult to perform at the recommended tempo. The student is advised to work through each difficult passage slowly and carefully by focusing on the threads of logical thought that bind them together.

It is important however not to allow the feel of the work to bog down or become too precise and sterile as there must always be an air of ease and fun throughout, even if you feel as though your fingers just dropped off of your hand. It should be performed at the liveliest tempo that the performer can manage and remember to shout as loud as you can in the Hey! at bar 103 and then come back in when you’re ready to.

Tycho, Tycho,Tycho is quite a challenge but it’s a lot of fun when you finally get it all together.

The Treacherous Tango was composed for principal flautist of the Sydney Symphony Orchestra, Janet Webb. In July 2002 I was invited to perform the Artie Shaw Concerto for Clarinet at the Sydney Opera House for the Sydney Symphony Orchestra’s “Swing in to spring” series. Whilst waiting in the wings backstage, Janet asked me if we could meet up for a talk sometime about jazz and Latin styles. A few weeks later after hearing Janet play, I began sketching “Treacherous Tango” for her wonderful CD “Tango and all that Jazz”.

The Treacherous Tango is in essence a cross-over piece in that it is never fully Latin, jazz or classical for any significant amount of time. The first section is a kind of “Bach goes Latin”. This then heats up a bit and changes in to an improvised solo section. The piano gradually drops out and leaves the soloist merrily grooving away over the feel. Realising that they are now completely venerable and on their own, the soloist becomes a little embarrassed and sheepishly fades out all the while tring to coax the piano back into the “game”. Finally the soloist gives up trying and instead, decides to launch in to a rollercoaster passage that the piano, (not wanting to be out done) effortlessly mimics but in octaves. Both then launch into a fiery Latin pattern that re-energizes the Latin feel once more.

The romantic section that follows, brings a little of “Spain” to the feel before both instruments frolic through a dual-time feel section that is a walking bass four feel in the left-hand of the piano against a turblent three feel in the solo part and right-hand of the piano. This culminates in both instruments swinging over a very short slow swing four-feel passage. The soloist then decides to try a bit of “improvisation” and takes-off over this feel once again. Shortly following this, the piano flies into a fiendishly difficult Latin styled solo with the soloist following closely behind.

After the soloist blazes its way through another “improvised” solo, the first and second themes return with vengeance and lead to a musical frenzy of furiously flying accelerando passages that end with a fluter tongued trill. Then with one final short argument and a rapid triplet outburst, it’s all over. Phew!

It’s quite a blow for anybody so when you do get to the end take time to praise yourself and your partner in crime at the piano for a great effort!

A Little Cha Cha, A Little Off Beat, The Way Home, Different Noodles, Fish 'n' Chips, Groovy Baby, It's Not Where You Think It Is, Latin Holiday, Low Tide, Secret Agent, Possums in the Roof, Strange Sounds From the Forest, Suede Shoes, Things That Go Bump in the Night, Whistling 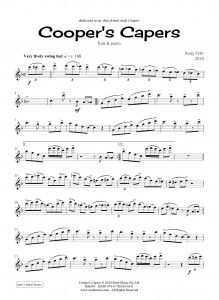 Arioso is a simple, pretty little romantically styled work originally written for alto saxophone. The first theme is constructed so that it instantly sounds and feels familiar to soloist and listener alike. Mid-way through however the musical “seas” become choppy and the soloist is soon hurled into a series of dramatic runs and arpeggios that culminate on a high note. The music once again calms down via a short but fugal styled piano interlude. With the return of the main theme the music becomes romantic and soothing once more as the conclusion to the piece is reached. This piece is perfectly suited for a HSC program, high school concert or recital and easily playable by an intermediate to advanced level player. 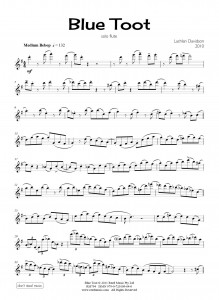 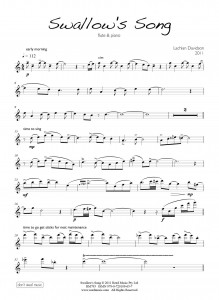