Alien Terrain
Alien Terrain is a piece describing the landscape of another planet.  Its strangeness and wonder mixed into one.

An Afternoon on Katoya
For this piece I tried more of a Jazz approach, with a twist.  The main melody line comes from a famous Jazz work by John Lewis called An Afternoon in Paris.  However, the melody has reshaped using the enigmatic scale. What you end up with is hints of the original melody but with a more warped or other worldly feel to it.  The chord progression was also taken from the piece by Lewis but using only the chords that are found within the Enigmatic Scale for the basis for its harmony.

The original idea was as follows. Let us pretend that you were an alien musician on another planet and that you got a radio signal from deep space.  You don’t know where it is from, but you tried to write down this music before the signal degraded.  Frantically looking for something write it down and when finally do you find something to write it down with you hear one piece before the transmission ends. All you have you got for sure was the form, and fragments of some of the melody.  Wanting to show this new music to your fellow musicians you had to combine the music that you heard with some of your own native style.

The Holy Mountains of Deion
This piece was to show that while Enigmatic Scale can produce some very harsh and strange harmonies, it can also be used to make a more beautiful melody or atmosphere.  The main idea Deion is a water planet and any land mass is considered to be a sacred place.

Treasures in the Attic is a series of short programmatic works for solo piano. Beginning with an inquisitive sense of wonder, Stained Glass Window explores the discovery of a manhole, the entrance to the attic. The neglected Rocking Horse has been abandoned and left to reminisce about the past. The ominous Seamstress’s Mannequin explores fear and trepidation to be found in the dark, dusty attic. In Rag Doll Ballet, a neglected one-eyed doll dances alone next to the off-key music box. 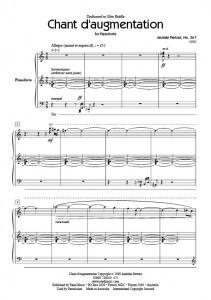