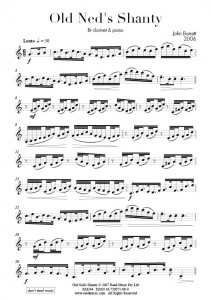 Contents: I. In Orbit, II. Departure Lounge, III. In Traffic

I. In Orbit
This was written wondering what it would be like to see the Earth from space. It also serves as a hymn to the technology of satellites that increasingly connect our humble human communications.

II. Departure Lounge
Most commonly, this is at an airport. When travelling alone, this can be a place to contemplate the state of one’s existence while trying to find the right angle to perch one’s hand luggage as a foot stool. But this can also be at a train station – and Sydney Central boasts a (very) modest lounge for travellers waiting for the night train to Melbourne.

III. In Traffic
Statistics bear out that lane swapping in heavy traffic to maximise time and position is mostly a waste of time and dangerous into the bargain. What’s worse is nipping into the fast lane on a slight opening, only for it to become the slow lane. My advice? Take the bike or public transport.

These pieces have been published with key signatures for ease of reading, though were not conceived as conventionally ‘tonal’ pieces. 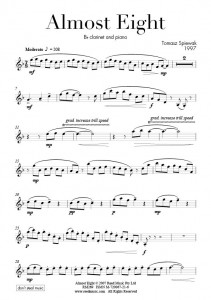 Contents: Penguins' Meeting, An Olde Serenade, By the Shores of Lake Cadibarrawirracanna, Emus on Parade, Promenade of the Wombats, Capriccio, Folk Dance 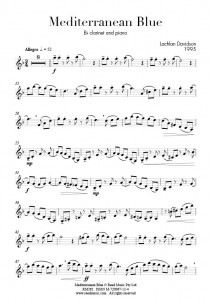 I originally wrote this for Lisa to play as a solo flute piece, then gave it to some Tenor Sax students before adding the piano part, which I now really like the sound of and it does add considerably to the piece. It is named Mediterranean Blue because it seems to have Southern European influences but a touch of the Blues too. Therefore you can approach playing it, leaning in either direction, either a little jazzy or quite Classical, (vaguely Spanish). The rhythmic feel is challenging to pin down, being almost felt in one beat to the bar, but only once you reach a certain tempo. Finding places to breathe can also be a little challenging. Sorry. You may find yourself humming this one in your sleep as I have.