Composer’s Note
Aftertraces... suggests ideas of the intangible: that which is transitory, immeasurable and perhaps ephemeral. Music is all of these things and, despite our best efforts to quantify and analyse it, music remains abstract and mysterious. This trio in four movements suggests different ideas of the intangible. It also attempts to play with the spatial elements of performance and sound by having the trio placed in different parts of the space, or not present at all, thus leaving the scope for solo, duo and trio textures.

Mirage suggests hallucination, illusion and fantasy, a figment of imagination opposite from reality. Part of the ‘mirage’ in this music is the illusion that a single instrument can sound like it is playing a complex chord, which is suggested by the use of various multiphonics, double harmonics and other extended techniques available (and now well- established in practice!) to the contemporary oboe player. Having moved through a veil of hazy sounds, trills and unorthodox devices, the music seems to enter another world, engendered by the chords and shapes set up by the various extended techniques at the beginning of the work but now more rhythmically-driven. The piece ends in a similar way to the beginning with the addition of the ghostly sound of a player offstage.

Air suggests various meanings: firstly the literal one of the breath wind instruments need to make their instruments sound and, of course, what we breathe in order to live. Secondly, an Air is an archaic English term used for Aria or song, and the song-like nature of this work for oboe and cor anglais is immediately apparent.The two instruments duck and weave in and out of each other’s way in long, occasionally decorated lines.
Ephemeral Echoes follows directly from the previous movement and plays with ideas of texture and space.The absent 2nd oboe emerges from the previous movement in an offstage solo. The long solo lines are passed around the trio in a series of echoes, as the lost oboist gradually makes their way back to the stage, embraced, so to speak, by the rest of the ensemble.

The echoes found in the third movement become more ordered and dance-like in Shadow Dance. The shadow is construed in terms of a canon (which can also be thought of as an echo) whereby one part plays exactly the same as another at the distance of a few bars later over a jaunty, circling bassline articulated by the cor anglais. Thus, there is always some sort of lead voice and another shadowing. The addition of a 2nd cor anglais part adds timbral variation and the possibility of canonic interplay between the two low instruments and in some sections a mensuration canon – which is where all parts play the same material but at different speeds.This Shadow Dance is bright in character and ends with a fleeting reference to the blurred edges of the first movement.

It was premiered by and is dedicated to Sydney Oboes:Alexandre Oguey,Diana Doherty and Shefali Pryor. Paul Stanhope

Call Me centres around communication and each movement explores a different idea based on this. The movements may be performed separately if desired.

Call Me explores the idea of being rung by different people; sometimes they are people we want to talk to and sometimes they are not. The music represents those phone calls, the interruptions they make in our lives and the different conversations we might have, depending on who the person is. The inspiration behind each movement stems from conversations we may be involved in.

Breaking Up takes a musical line and literally breaks it up – between parts and between pitches. The structure is based on a verse and chorus form, much like a cliched love song that the title seems to imply.

On Hold represents the frustration at being put on hold and having to listen to piped music. The music tries to break free from itself and there are big climaxes, but ultimately they are unsuccessful and return back to the main theme as the listener continues to remain on hold.

Crossed Lines takes its inspiration entirely from the title. The musical lines are constantly intertwined, sometimes fighting with each other, so it is difficult to know which instrument line is the main focus. The instruments also argue as to which key they should be in, resulting in moments of bitonality.

Commissioned by the Rose Trio with funds from the RVW Trust. 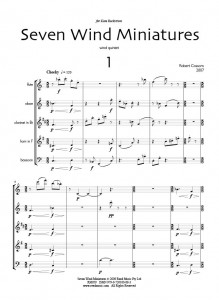