This three movement work for advanced piano soloist captures both the horror and heroism of three devastating battles; The 2nd World War, The 1st World War and The American Civil War. Each movement is based on a very simple popular song from each era of battle. Andy treats each familiar tune with a different and surprising manner that transforms what was once a common ditty into a challenging and sometimes poignant statement about the nature of war and the character of the men and women that made the ultimate sacrifice for us to enjoy the fragile peace we have now. This work is set at an advanced level and it will present the soloist with a fair deal of technical and emotional challenge.

Movement one is set in a Baroque fugal style over the popular 2nd World War Glenn Miller hit recording of “When Johnny Comes Marching Home Again”. The work begins with the sound of marching boots that lead us through a series of fugal renditions of the theme that are designed to confuse and disorient the listener as the movement gradually leads them into the musical battle field. Snippets of the theme return here and there unexpectedly as the sounds and scenes of battle grown ever closer and the piano playing becomes increasingly manic and furious driving to a sudden peaceful pause. But the battle is not over yet and the soloist is hurled into a short reprise before tumbling head long into a series of cascading passages to the fire of the finale section.

Movement two sees the once happy-go-lucky ditty “It’s a long way to Tipperary” transformed into a musical commentary on the horror, tragedy, mate ship and courage forged during the Gallipoli campaign of the 1st World War. Andy’s treatment of this familiar tune is guaranteed to stir the heart soloist and listener alike.

Movement three takes the American Civil War anthem “Battle Hymn of the Republic” and
through a series of variations explores every nook and cranny of the melody and taxing the technical limits of the soloist in the process. Andy takes soloist and listeners from a plaintive choral-styled rendition of the popular hymn through a series of variations of ever increasing challenge until the final cascading version of the theme has the final word that seems to say that “ultimately the human heart will prevail”.

Andy has dedicated this work to his friend and mentor, Maestro Tommy Tycho. 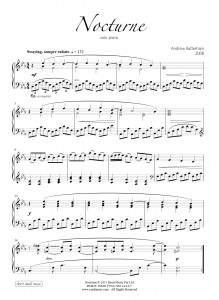 Alien Terrain
Alien Terrain is a piece describing the landscape of another planet.  Its strangeness and wonder mixed into one.

An Afternoon on Katoya
For this piece I tried more of a Jazz approach, with a twist.  The main melody line comes from a famous Jazz work by John Lewis called An Afternoon in Paris.  However, the melody has reshaped using the enigmatic scale. What you end up with is hints of the original melody but with a more warped or other worldly feel to it.  The chord progression was also taken from the piece by Lewis but using only the chords that are found within the Enigmatic Scale for the basis for its harmony.

The original idea was as follows. Let us pretend that you were an alien musician on another planet and that you got a radio signal from deep space.  You don’t know where it is from, but you tried to write down this music before the signal degraded.  Frantically looking for something write it down and when finally do you find something to write it down with you hear one piece before the transmission ends. All you have you got for sure was the form, and fragments of some of the melody.  Wanting to show this new music to your fellow musicians you had to combine the music that you heard with some of your own native style.

The Holy Mountains of Deion
This piece was to show that while Enigmatic Scale can produce some very harsh and strange harmonies, it can also be used to make a more beautiful melody or atmosphere.  The main idea Deion is a water planet and any land mass is considered to be a sacred place.