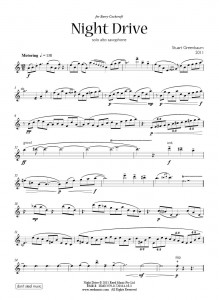 Night Drive is almost entirely constructed out of a 24–quaver pattern that results from the interlocking of a 4–note motive against a 3–note motive.

This technique builds upon a very similar idea found in the music of Steve Reich and in particular his 1967 work Piano Phase, which interlocks a 3–note motive against a 2–note motive.

In Night Drive, the majority of new rhythmic and melodic shapes are created by substituting rests for beats, resulting in new patterns and shifting rhythmic emphasis. The original pattern was formulated at the piano and the subsequent variations were all shaped with the sound and technique of a solo alto saxophone in mind.

To me, this is travelling music – fast in tempo, steadily driving through the night.

The work was written for my long–time friend and musical collaborator, Barry Cockcroft.