The Melbourne Sonata is a major work for soprano saxophone & piano. It is dedicated to Irish saxophonist Gerard McChrystal and is a 12 minute composition in three movements, Go, Slow and Blow.

The effective performance of this piece lies in the ability of the duo to maintian considerable intensity throughout. The two parts are tightly integrated and at times the two instruments should be indistinguiable from one another. With few gaps in the saxophone part, circular breathing essential. The lines weave in and out of each other leaving neither instrument prominent. With the pedal depressed throughout the 2nd movement, some of the saxophone notes should cause the piano to resonate. It was not my intention to have the saxophone playing into the piano but rather a resonant 3rd voice in the distance. The final movement requires clarity of articulation and a hint of a Celtic feel.

Composed in 2012 for American saxophonist Kenneth Tse, ‘Rock Us’ continues on from the craziness of my solo saxophone piece Rock Me!, also composed for Kenneth Tse. I wrote Rock Us with two soprano saxophones in mind, but there is no reason (other than the usual challenge of getting multiphonics to work) that it wouldn’t be suitable for other saxophones.

I was looking for something a little different in this piece and I had been doing some experimenting playing the folk song Hava Nigila. One thing I enjoyed about performing Hava Nigila was the flexibility of pitch that could be used to create melodic colour. I like to think of it as ‘slippery pitch’ – just as you lock onto a centred note, you can bend away – tearing the melody in a new direction.

‘Rock Us’ begins with a colourful free opening similar in some ways to my 1996 composition
‘Ku Ku‘ but with a more mournful feel. It explores the tension of moving toward and away from an unstable drone sustained by the other saxophonist. Saxophone players should enjoy the opportunity of being creative (on purpose) with the intonation!

In this piece I make extensive use of different forms of slap tonguing. There is a combination of rapid quasi slaps at q =126, reverse slaps simulating bass drum and a plucked bass line, and unpitched slaps creating percussive-like sounds. The overlaying of these slaps helps to create some of the rock music elements. An acoustic simulation of digital delay can be heard where the two instruments are offset by one beat - rhythmic precision required.

Wild harmonic ripping is called for in the piece (as used in my tenor saxophone piece
‘Beat Me‘) and should be played in an uninhibited and expressive manner. The overtones may be considered as variations of tone colour rather than a literal sounding of the notes indicated.
The multiphonics help to provide the harmonic movement and should be played in a melodic rather than aggressive way.

At times the two parts may play independently of each other, indicated with the squiggly bar lines. Both parts should attempt to be in approximately the same place but vertical precision is not required in these passages.

The piece is about 9 minutes in duration and should provide the listener with an engaging journey of discovery with rock music ingredients and middle eastern flavours.

I had the pleasure to premiere this piece with Kenneth Tse at the World Saxophone Congress in Scotland 2012.

Rock Me! captures the relentless driving energy, rhythms and beats found in many forms of rock music. A rapid and unwavering tempo, a gradual increase of the musical density and the exploration of an extensive range of colourful dynamics is vital in the performance of this piece. At times the saxophonist must simulate various other instruments including didgeridoo, electric bass, drum kit, distorted guitar and occasionally even acoustic saxophone. 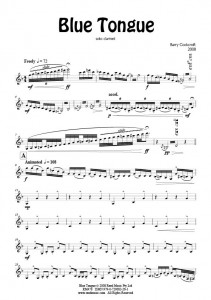 Blue Tongue is a solo piece in a blues style with a theatrical element to be performed with a sense of humour. After a brief rubato introduction, the rhythm and pulse must remain relentless with a gradual increase in the dynamics and intensity of the piece. From figure D the clarinetist should gradually disassemble their instrument while playing. As the instrument gets shorter, the music should maintain its flow right up to the final note played on just the mouthpiece. The actual pitch in the final section will depend upon the particular instrument of each player, so don’t be too concerned with precision of pitch, the gesture is more important. The written notes indicate the fingering to be used rather than the exact pitch. Ample amounts of cork grease may be required to ensure that the clarinet comes apart smoothly and quickly.

Breathing and phrasing will depend upon each individual clarinetist. Bracketed notes may be omitted to allow for quick breaths if required. Grace notes can be lazy, tremolos should be played fast, articulation crisp rather than legato and slides should be played smoothly like a portamento. If the slides are impractical, the alternate written notes may be played.

The piece should be played with a sense of humour and creative ways of taking apart the clarinet could be employed. For example, gradually putting the pieces of the clarinet into the case and then walking off stage at the end...